In BookLife and Publishers Weekly’s second annual starred reviews roundup, we celebrate the best of the best: the indie-published books that received starred reviews in 2015. 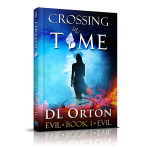 Launching the Between Two Evils series, Orton constructs a delightfully fun time-travel adventure that spans years and universes. Isabel is facing the consequences of her self-destructive behavior: she’s freshly divorced and on the edge of losing her life’s work. Things look up when she’s reunited with her long-ago love Diego, but their renewed relationship begins with and is punctuated by disasters. Physics professor Matt is conscripted to unravel the mystery of an impossible object that is causing the perils threatening the lovers. Matt and his team use technology sent from the future to determine that the key to saving the world is personal rather than global: it depends, somehow, on the enduring love between Diego and Isabel. Orton has carefully balanced existential peril on the micro and macro scales, slowly raising the stakes until a fever pitch is achieved. What at first seems silly or pointless becomes vital as the nature of causality is revealed. Engaging, funny, romantic, and harrowing, this promising series opener will leave readers satisfied by its unexpected yet earned conclusion, and curious about what comes next.

This article appeared in the 12/14/2015 issue of Publishers Weekly under the headline: The Self-Published Stars of 2015