Review: Crossing In Time by D.L. Orton – A Little Bit of R&R 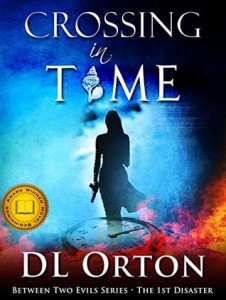 Thanks to Autumn over at A Little Bit of R&R for this review!

If someone took everything you live for, how far would you go to get it back?When offered a one-way trip to the past, Isabel sacrifices everything for a chance to change the rapidly deteriorating present–and see her murdered lover one last time. When she arrives twenty years in the past, buck naked and mortally wounded, she has 24 hours to convince a stunned but enraptured nineteen-year-old to change their future. Definitely easier said than done, as success means losing him to a brainy, smart-mouthed bombshell (her younger self), and that’s a heart breaker, save the world or not.

This offbeat tale is about falling madly in love when one is too cynical for such things, letting go of pessimism when it’s the last life jacket on a sinking ship, and racing against the clock when one doesn’t have the proper footwear. It’s a coming-of-age story for old fogeys, a how-to-make-love guide for diehard celibates, and a laugh-out-loud tragedy with a hopeful twist.

Love conquers all. (Unfortunately, it’s not going to be enough.)

Crossing In Time by D.L. Orton

I have never been a big reader on time traveling as it has never appealed to me, but when I read the blurb of this book I figured I would jump out of my norm of reading and give it a go.

Now I wasn’t disappointed in the book as it was good, but I felt it had more romance in the book than anything and maybe this is what was intended. We start off with the story in a post-apocalyptic world where our main character Isabel is buying a gun and it makes us wonder oh what caused this scene. After that chapter of the buying of the gun we are then thrown into the present world where we meet Diego and him saving Isabel after a fire has started.  Now these two have a past and a future together to where when going back in the past Isabel has to work on her relationship with Diego when he is twenty something years old. Because of these fires something was uncovered which has caused the government to kidnap people who might know about it, one of the characters being Matt then later on Diego because his name is mentioned.

There are some sex scenes that… [read the rest of the review here!]